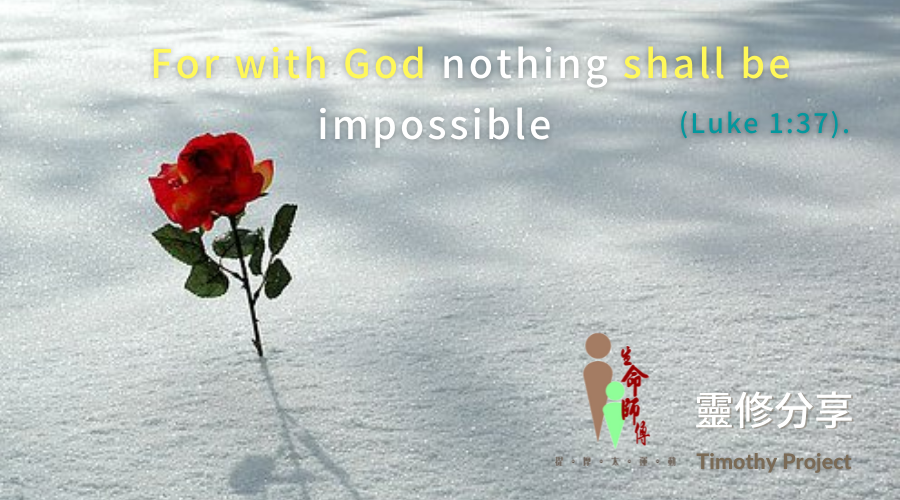 Streams in the Desert Nov 28

Impossible Flowers
"For with God nothing shall be impossible" (Luke 1:37).

Today's Scripture & Insight:
Luke 1:30-38
30 But the angel said to her, “Do not be afraid, Mary; you have found favor with God. 31 You will conceive and give birth to a son, and you are to call him Jesus. 32 He will be great and will be called the Son of the Most High. The Lord God will give him the throne of his father David, 33 and he will reign over Jacob’s descendants forever; his kingdom will never end.”
34 “How will this be,” Mary asked the angel, “since I am a virgin?” 35 The angel answered, “The Holy Spirit will come on you, and the power of the Most High will overshadow you. So the holy one to be born will be called[a] the Son of God. 36 Even Elizabeth your relative is going to have a child in her old age, and she who was said to be unable to conceive is in her sixth month. 37 For no word from God will ever fail.” 38 “I am the Lord’s servant,” Mary answered. “May your word to me be fulfilled.” Then the angel left her.

Far up in the Alpine hollows, year by year God works one of His marvels. The snow-patches lie there, frozen with ice at their edge from the strife of sunny days and frosty nights; and through that ice-crust come, unscathed, flowers that bloom.

Back in the days of the by-gone summer, the little soldanelle plant spread its leaves wide and flat on the ground, to drink in the sun-rays, and it kept them stored in the root through the winter. Then spring came, and stirred the pulses even below the snow-shroud, and as it sprouted, warmth was given out in such strange measure that it thawed a little dome in the snow above its head.

Higher and higher it grew and always above it rose the bell of air, till the flower-bud formed safely within it: and at last the icy covering of the air-bell gave way and let the blossom through into the sunshine, the crystalline texture of its mauve petals sparkling like snow itself as if it bore the traces of the flight through which it had come.

And the fragile thing rings an echo in our hearts that none of the jewel-like flowers nestled in the warm turf on the slopes below could waken. We love to see the impossible done. And so does God.

Face it out to the end, cast away every shadow of hope on the human side as an absolute hindrance to the Divine, heap up all the difficulties together recklessly, and pile as many more on as you can find; you cannot get beyond the blessed climax of impossibility. Let faith swing out to Him. He is the God of the impossible. --Selected

The God of the Impossible

Scripture to Respond
Genesis 18:14
Is anything too hard for the LORD? I will return to you at the appointed time next year, and Sarah will have a son.”
Romans 4:17-21
17 As it is written: “I have made you a father of many nations.”[a] He is our father in the sight of God, in whom he believed—the God who gives life to the dead and calls into being things that were not.
18 Against all hope, Abraham in hope believed and so became the father of many nations, just as it had been said to him, “So shall your offspring be.”[b] 19 Without weakening in his faith, he faced the fact that his body was as good as dead—since he was about a hundred years old—and that Sarah’s womb was also dead. 20 Yet he did not waver through unbelief regarding the promise of God, but was strengthened in his faith and gave glory to God, 21 being fully persuaded that God had power to do what he had promised.

Reflection:
The almighty God turns the impossible into possible. The most impossible thing is that He sent His only son to sacrifice for our sins and achieve salvation for us, a group of unremarkable people.

Are you willing to stand firm when difficulties come and heap them up and entrust everything to the almighty God?
Prayer:
Dear Lord, please strengthen the power of my faith. Help me learn to entrust all the difficulties to you and believe in your promises so that my faith will grow steadily.

聖經 上帝 主耶穌
信徒生活 愛的追尋
推薦文章
Hiding from God 22/1
God always sees us and knows us—to Him we’re always in plain sight. Just as He pursued Adam and Eve, Jesus sought us out while we were “still sinners”—dying on the cross to demonstrate His love for us. We no longer need to hide.
躲避上帝 22/1
上帝總是看到並瞭解我們。對祂而言，每個人都是清晰可見的。正如當初上帝尋找亞當和夏娃一樣，耶穌在我們還作罪人的時候，就尋找我們，甚至為你我被釘死在十字架上，向我們顯明祂對我們的愛。我們再也無需躲藏！
He Has Overcome the World 21/1
When the enemy meets us at the threshold of any great work for God, let us accept it as "a token of salvation," and claim double blessing, victory, and power. Tribulation is the way to triumph. The valley-way opens into the highway. Tribulation's imprint is on all great things. Chains of character that wind about the feet of God are forged in earthly flames. No man is greatest victor till he has trodden the winepress of woe. You can read today’s devotional scriptures and insight via the link below:
祂已經勝了世界 21/1
仇敵的攻擊、破壞和攔阻，我們應當看為上帝施行拯救的記號；這時候就是我們向上帝支取加倍的祝福、勝利和能力的機會。患難是勝利的捷徑。山路之後，就是大路。一切偉大的事業上面，都有患難的印跡的。發光的金鍊，必須經過爐火的燒、錘。沒有一個人配算為得勝者，除非他歷盡苦楚。 你可以透過以下連結，看到今天的靈修分享：
查看全部